Before starting anything let me quickly explain the setup we will be using for the demonstration. I have created a directory with the name “Python Tutorials” in my D drive. In that directory I have created a script with name “Tut1.py”. This script contains a code which on successful execution displays the current version of Python installed on my system.

Now let’s move ahead and learn how to execute this script using command prompt in windows 10.

There are two ways of doing it:

Let’s try to execute our script “Tut1.py” using both the above mentioned ways. Let’s start with the first way which is navigating to the directory.

Navigating To the Directory

Step 1: Navigating to the script location. 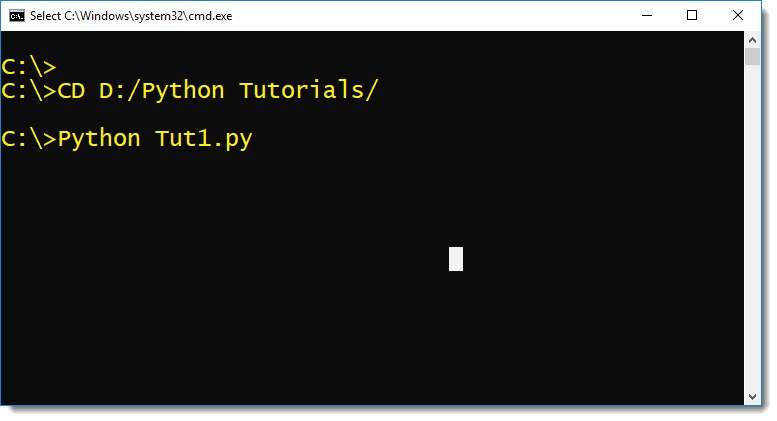 Step 2: Invoke the Python interpreter to run the script.

Python’s interpreter can be invoked simply by writing keyword “python” on command prompt. In order to execute a script we need to accompany the keyword “python” with the name of the script enclosed inside a pair of double quotes.  Like this:

These two rules are mandatory. You have to follow this otherwise you will get an error.

Invoke the Python interpreter with the script location

This method of executing Python script is easier than the previous one. In this method we invoke Python’s interpreter with the location of the script. Let’s once again run the same Python script “tut1.py”.

The location path of the “tut1.py” script is D:\Python Tutorials\tut1.py (this location could be different in your case.)  In order to run this script we have to specify this location followed by the keyword Python in the command prompt. Like this

The rules for running the script will remain the same.

So these are the two different ways in which you can execute python scripts in command prompt in windows 10. Hope you will find this tutorial helpful. If so then I want you to share this blog on your social media. I will be really grateful. Thanks & have a great day!

Cursor For Loop With Simple Explicit Cursor In Oracle Database

What Are PL/SQL Cursors In Oracle Database