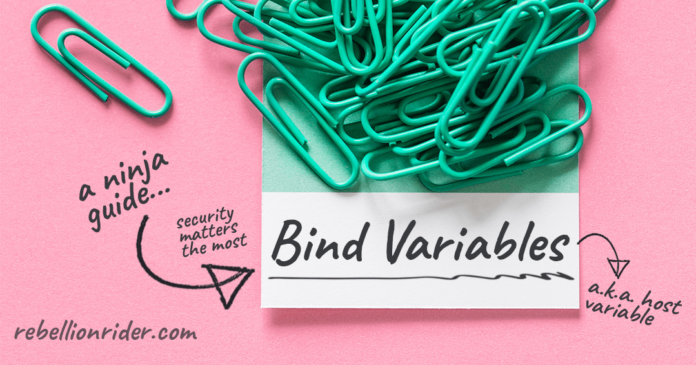 How To Create, Declare, Initialize and Display Bind Variables in PL/SQL

There are two types of variables in Oracle database.

Unlike user variables which can only be declared inside the declaration section of PL/SQL block you can declare bind variable anywhere in the host environment and that is the reason why we also refer bind variables as host variable.

Definition
Bind variables in Oracle database can be defined as the variables that we create in SQL* PLUS and then reference in PL/SQL.  ~ Oracle Docs

How To Declare a Bind Variable (Variable command)

Let’s do an example and declare our first bind variable

Did you notice that I didn’t write any PL/SQL block or section here to declare this bind variable which is very unlike the user variable.

Other Uses of Variable Command.

Declaring the bind variable is the first use of this variable command there are few other uses of it also. Let’s see what those are:

List all the bind variables declared in the session.

Execute the above command and that will show you the list of all the bind variables that you have declared in your session.

See the definition of bind variable.

Let’s do an example and see the definition of this bind variable v_Bind2.

Execution of above command will show you the definition of bind variable RebellionRider.

So these are the few uses of Variable command in Oracle database. If you know any other uses then do tweet and tell me at @RebellionRider.

Restriction:
﻿If you are creating a bind variable of NUMBER datatype then you can not specify the precision and scale.

You can initialize the bind variable using “Execute” command.

Execute command is like a wrapper which works as an execution section of PL/SQL block. Let’s see how it works.  Let’s initialize our bind variable v_bind1 with a string RebellionRider.

This statement starts with keyword Exec which is the starting 4 alphabets of Keyword Execute.  You can either write whole keyword Execute or just the starting 4 alphabets “Exec” both will work fine. This is followed by the name of our bind variable which is v_bind1. After that we have assignment operator followed by the string Rebellion Rider, as it’s a string thus it’s enclosed in single quotes.

That’s the first way of initializing the bind variable. The second way is:

If you do not like shortcuts and are willing to do some hard work of writing a few extra lines of code then this is for you.

This is a simple execution block where I initialized the bind variable v_bind1 with the string Manish Sharma.

That is how we initialize the bind variable in Oracle Database or in PL/SQL.

Manish why did you put the colon sign (:) before the name of bind variable (:v_bind1) while initializing it? Glad you asked.

Unlike user variables which you can access simply by writing their name in your code, you use colon before the name of bind variable to access them or in other words you can reference bind variable in PL/SQL by using a colon (:) followed immediately by the name of the variable as I did in the previous section.

There are 3 ways of displaying the value held by bind variable in PL/SQL or say in Oracle Database.

Let’s check out each of them one by one.

Things you must take care of here are:

I highly recommend you to read my PL/SQL Tutorial 1 to understand Blocks & Section in PL/SQL you can also watch my video tutorial on the same.

Writing keyword PRINT without any argument will display you the current values of all the bind variables with their names in the session.

The last way of displaying the current value of a bind variable is by setting a session based parameter AUTOPRINT on. Doing so will display you the value of all the bind variables without the use of any specific commands such as Print or DBMS_OUTPUT which we just saw.

To set this parameter you simply have to write

And this command will set AutoPrint parameter on for the session which will automatically print the values of bind variable.

If you are like me who prefer learning by watching video then you can check out the video tutorial on this topic right here.

That’s all about Bind Variables. Next in the course you can learn about Conditional Control statements in PL/SQL here.

Hope this article was helpful. Kindly please share it with your friends and help me reach out to more people. Thanks guys & have a great day!

How to insert data into a table using SQL Developer GUI.