What is Python Pandas?

Python Pandas is an open-source library for data analysis. It is made on top of Python Programming language. It enables you to work with tabular data. Using pandas, you can not only load the data in a fast and efficient manner but also manipulate it according to the needs of your data analysis project.

When should we use Python Pandas?

Python pandas works best with spreadsheet-like data. Therefore, if your project requires analysis of the data that is saved in row-column format then Python Pandas is a tool that you must opt for.

Another best utility of Python Pandas is when you have to scrap the data from the internet and save it into a relational database, in this scenario Pandas works like a charm.

Spreadsheet-like data, rectangular data or tabular data, these all are the same terms used for the data that is saved in row and column format.

What is dataFrame and Series?

dataFrame: dataFrame is a 2D labeled heterogenous data structure. In simple words if the data is stored in a table then that entire table is a dataFrame.

dataFrame is called a heterogenous data structure because it can hold the data of different data types.

Series: On the other hand, a Series is a 1D labeled homogenous data structure. In simple words, if the data is stored in a table then every single column of that table is a Series.

Series is called a homogenous data structure because it can hold the data of same data type like an array.

Why do you call dataFrame and Series a Data Structure?

A data structure is defined as a way of storing and organizing the data in such a way that it is easily available for modification and further processing.

And, in Python Pandas we use DataFrame and series for storing the data. Hence, they are referred to as data structures.

So far, we saw logical based definition or explanation of the dataFrame and the Series. Now let’s see what they actually are.

They are actually a class, aren’t they?

Since Python Programming is an Object-Oriented programming language which means whatever you create or use in Python is a class. And that implies Pandas dataFrame and Series is nothing but a class which have their own attributes and methods, just like any other class in the Python standard library. And similar to every other class, in order to use these attributes and methods we have to create an instance of dataFrame and Series class.

We will learn how to do that in the next tutorial.

Points to be remember.

There are a few things that you must know. Knowing them will not only help you with your programming but also in interview. These are –

Did you know – The Python Pandas has its own data types?

The data type of the data that is stored in a dataFrame is not the same as that of those that comes with the Python standard library. 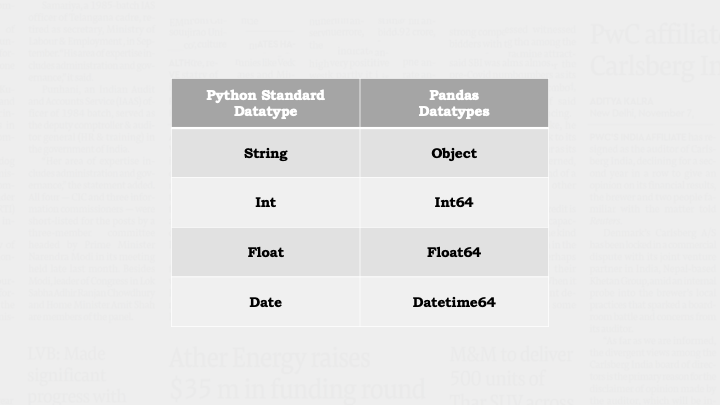 That is the introduction to simple yet powerful Python library for data analysis. Hope this article has cleared all your doubts. In case not then feel free to send me a message on my Instagram and Facebook.

Thanks and Have a great day!

How To Enable Archive Log Mode In Oracle Database 19c

How To Solve SQL Error ORA-00942: Table Or View Does Not Exist

How To Use SQL DISTINCT Statement With Multiple Columns