What is a database cursor? I guess, is the question which majority of us have faced at least once in our life either during our college studies, or job interview or while doing oracle certification. Database cursor is an important topic from oracle certification as well as from job interview perspective. Thus I am writing this blog by taking both the perspectives in mind so that you will get good marks in your exams as well as ace your Job interview.

What is Database Cursor?

Cursor is a pointer to a memory area called context area. This context area is a memory region inside the Process Global Area or PGA assigned to hold the information about the processing of a SELECT statement or DML Statement such as INSERT, DELETE, UPDATE or MERGE.

What is the Context Area?

Let’s dig a little deeper and see what the context area is?

The context area is a special memory region inside the Process Global Area or PGA which helps oracle server in processing an SQL statement by holding the important information about that statement.

Using cursor you can control the context area as it is a pointer to the same.

There are two main advantages of a cursor:

Types of cursors in oracle database:

There are two types of cursors in oracle database:

As the name suggests these are the cursors which are automatically created by the oracle server every time an SQL DML statement is executed. User cannot control the behavior of these cursors. Oracle server creates an implicit cursor in the background for any PL/SQL block which executes an SQL statement as long as an explicit cursor does not exist for that SQL statement.

Oracle server associates a cursor with every DML statement. Each of the Update & Delete statements has cursors which are responsible to identify those set of rows that are affected by the operation. Also the implicit cursor fulfills the need of a place for an Insert statement to receive the data that is to be inserted into the database.

Steps for creating an Explicit Cursor

To create an explicit cursor you need to follow 4 steps. These 4 steps are:

In case of implicit cursors oracle server performs all these steps automatically for you. 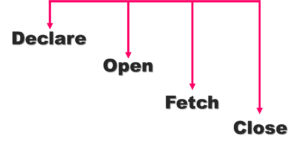 Info Byte:
Unless the complete cycle of declaring, opening, fetching and closing has been performed, you can’t use a cursor.

Declare: How To Declare a Database Cursor?

Declaring a cursor means initializing a cursor into memory. You define explicit cursor in declaration section of your PL/SQL block and associate it with the SELECT statement.

Open: How to Open a Database Cursor?

Active set: Rows from all the involved tables that meet the WHERE clause criteria.

Fetch: How to retrieve data from cursor?

What happens when you execute fetch command of a cursor?

Close: How To Close a Database Cursor?

Once you are done working with your cursor it’s advisable to close it. As soon as the server comes across the closing statement of a cursor it will relinquish all the resources associated with it.

Info Byte:
You can no longer fetch from a cursor once it’s closed. Similarly it is impossible to close a cursor once it is already closed. Either of these actions will result in an Oracle error.

Basic Programming Structure of the Cursor

Here is the basic programming structure of the cursor in oracle database.

Oracle provides four attributes which work in correlation with cursors. These attributes are:

First three attributes ‘Found’, ‘NotFound’ and ‘IsOpen’ are Boolean attributes whereas the last one ‘RowCount’ is a numeric attribute.

Let’s quickly take a look at all these attributes.

Cursor attribute ‘Found’ is a Boolean attribute which returns TRUE if the previous FETCH command returned a row otherwise it returns FALSE.

‘Not Found’ cursor attribute is also a Boolean attribute which returns TRUE only when previous FETCH command of the cursor did not return a row otherwise this attribute will return FALSE.

Row count cursor attribute is a numeric attribute which means it returns a numeric value as a result and that value will be the number of records fetched from a cursor at that point in time.

So, this is the detailed blog on cursors in oracle database. Hope it will help you with your exams as well as with your job interview. Do make sure to share this article on your social media or you can share this blog on your twitter.

Thanks for reading & have a great day!

Who Should Do The Oracle Database Certification?

How To A Create New User Account Using Enterprise Manager