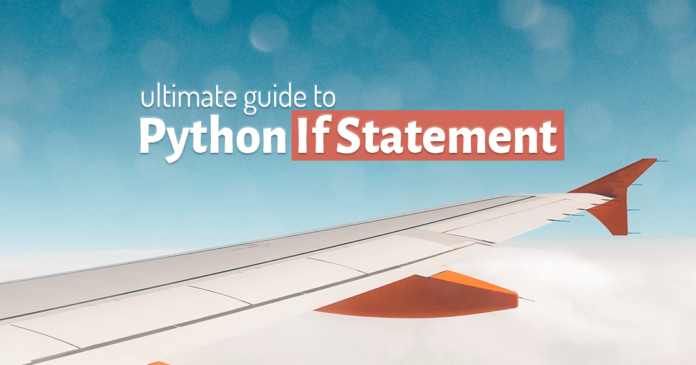 In order to understand what is a Python if statement we first need to know what are execution structures?

A logical process which tells the flow of execution of a program is know as the structure of execution. There are two types of structures available, and these are –

A structure where a set of statements execute in the order in which they are written is called Sequential Structure. For example

This program has three statements. And on execution all three of them will run one after another.

A logical structure where we can control the flow of the execution of the program is called a controlled structure.

Also, there are two types of controlled structure, these are –

Python If statement is the best example of Conditional Control Structure, thus in this tutorial we will focus on it. Furthermore, we will talk about looping in future tutorials.

What is Python IF statement?

Not only in Python Programming but in any computer programming language, the best example of conditional control structure is ‘If Else’ statement.

I know the definition sounds a little technical. But, don’t worry just follow along & you will understand. In this blog, I have given the explanation of every technical word used in the definition.

The Syntax of Python IF statement.

The syntax of Python IF statement is very simple. Take a look at it—

The statement starts with the keyword ‘ if ’. Followed by that we have ‘condition’. To illustrate, the condition is nothing but an expression which gets evaluated either as ‘true’ or as ‘false’. Meanwhile, right after the condition, we have a colon (:). Since in Python programming it is mandatory to put a colon right after writing the condition or expression in IF clause.

Let’s call this combination of the keyword ‘if’, the condition as well as the colon (:) – the if clause.

Right after our if clause we have a block of statements. Consequently, this block can contain either one or more than one executable statements.

Examples of Python If Statement.

Before, in the definition, we learnt that If statement is a conditional controlled decision structure. Now, let’s try to understand what that means through the help of an example.

Example 1: Python IF is a Conditional Controlled Decision Structure

Let’s say you want to write a code that will help your classmates to know whether they are promoted to the next semester or not.

Meanwhile, the promotion criteria decided by your college is the marks. Consequently, any student who has secured more than 45% of marks will be promoted to the next semester.

So, you have decided to use this information for your program.

This Python program is divided into three parts. Let me explain those to you –

In the first three lines we are declaring and initializing the Python Variables. Let’s see what are those variables?

Total_marks: In the second variable we have stored 1100. Let’s suppose this is the total number of marks of all the exams.

Marks_obt: The third variable is the marks obtained. In this variable we are taking a float input from the user. Consequently, here the user has to enter the total marks he or she has secured.

In this part we are calculating the percentage obtained by the student using the values of variables from part 1. As a result, that calculated value of the percentage will get stored into the variable pct_obt

This is the main part of our program. Because here we are using the Python IF statement to make the decision.

Firstly, what is that decision?

Now, let’s come to this Python If statement. As we know that an If statement has two parts. An If clause and the body. Let’s first check out the if clause.

Now that you have seen an example of the Python IF statement, understanding the definition of the if statement will be easier for you.

Python If – Why Conditional Controlled Structure?

As you can see, in this program the flow of execution is controlled by the condition used as the expression of the Python IF statement, hence the name condition control statement.

Python If – Why Decision Structure?

Python if – A Single Alternative Structure.

Now you ask – In the definition you also said that the Python If statement is a single alternative structure. What do you mean by that?

In order to explain that, I need to draw a flow chart. Take a look at that here —

Since Python if statement provides only one alternative path of execution hence we call it single alternative structure.

In a single alternative decision structure, a set of statements execute only if a certain condition exists. If the condition does not exist, then the action is not performed.

For example, in the above program, the students are getting informed that they are promoted only when the condition pct_obt >= min_marks_pct gets satisfied.

So that is the explanation of the definition that I gave to you earlier in this blog. Now let’s move on and learn how to overcome the shortcomings of a single alternative structure.

But before that, if you are like me who learns better by watching a video then you can go ahead & check out the Python video tutorial that I’ve done on this topic.

And now back to the point…

The problem with the single alternative controlled structure is that – it is only good so long as the expression/condition of the if clause is evaluated as true. But, what if the condition is false. In such a situation we need a dual alternative structure. And that structure is Python If-Else Statement.

What is Python If-Else Statement?

The Syntax of Python If-Else statement?

we call a Python if-else statement a dual alternative structure.

Here is the example of Python if-else statement. Except from the else block everything is pretty much the same. Now whenever a student scores less than 45% marks, he or she will not be kept in the dark. Instead he/she will be properly informed that he/she has not been promoted.

That is how we properly write a Python If-Else statement.

There are a few precautions which you must take care of whenever you write a Python if statement. These are —

That is your complete guide on Python If statement. Stay tuned, as in the next Python tutorial we will learn how to further improve our code by solving its problems by using nested decision structure in Python Programming. You can also connect with me on my Facebook Page for more interesting content on Python.