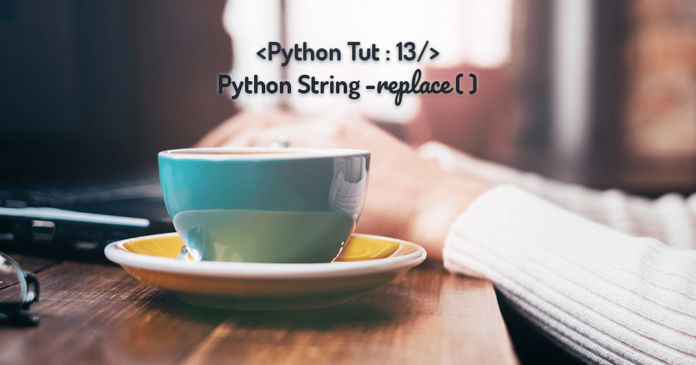 Python String – replace ( ) Method is a very powerful tool if used correctly. The right use of the same could save you a huge amount of time. For example, let’s say you are working on a project and one of your team members misspelt a name repeatedly in the entire project. Now you have to correct it. In order to do that you have two options.

So, which one do you think will be the most efficient way to carry out this work? If I have to choose, then I will go with the second option.  Moreover, in this tutorial, I will show you how to properly use Python String – replace ( ) Method.

What Is The Python String replace ( ) Method?

As the name suggests, String Method replace ( ) is a built-in string method which replaces one pattern from another and returns a new string as a result.

Consequently, you must be wondering why it returns a new string I will explain to you that at the end of this tutorial.

Similar to other string methods such as startswith ( ) and endswith ( ) this also accepts three arguments. Let’s see what those are?

old_str – The first argument is the old string. This is the string which you want to replace. Therefore, it could be a single character or a multi-character string.

new_str – The second argument is a new string. This is the string that will replace the old one.

instance – This argument indicates, number of instances of old string which will get replaced by the new one. In addition, among three this is the only integer argument.

Among all the arguments only instance is the one that is optional, rest of them are mandatory. Consequently, if you do not specify the last argument (instance), then by default all the instances of the old string in the base string will get replaced by the new one.

In order to perform an example, we first need a base string over which we will run our string method replace. Thus, for today’s demonstration, our base string will be. –

Moreover, now that we have our base string, let’s do our first example-

In the first example, I will only use the first two parameters of the method. Meanwhile, I will save the third parameter for the next example.

Now say, you were a big fan of pizza when you wrote this message. Afterward, you realized that “fudge cake” is much better than a pizza. Consequently, you decided to modify this message. Let’s see how we can do this using string method replace —

Another way to write the above code will be

Here except from the way of calling the Python String – replace ( ) method, everything is pretty much the same therefore both codes will produce the same result.

In this example we will use all three parameters of the string method replace ( ). Firstly, let’s understand what is the significance of this optional parameter instance?

The third parameter instance let’s you control the number of old string instance to be replaced by the new string. For example, let’s say your team member wrongly typed the name for a total of 18 times. After analyzing the project, you realized that only the first 16 entries are incorrect.

In such use-cases, where only the first few entries needs to be replaced and not all, you use the third parameter instance of Python string method replace ( ).

Now once again let’s take the example of our base string. Let’s say, you only want to modify the first three instances of “Pizza” with “Fudge Cake”.

Therefore we simply have to add 3 as the value of our third parameter in the method call. Like this –

Subsequently, you could see that except from adding integer 3 in the method call we changed nothing. Accordingly, on execution, only the first three instances of “Pizza” will get replaced with “Fudge Cake”, not all.

So, that is how we properly use a Python String replace ( ) method.

Now let’s discuss something which everyone knows but nobody shares. Why string Method replace ( ) returns a new string. This secret could help you with your interview and save you from various errors.

In the meantime, if you learn faster through videos then you can watch this explanation here in my video. But, those who love reading, here you go –

If you remember, earlier I said that the replace ( ) method, returns a new string as a result. The question here is Why a new string? You will get the answer to this question in the explanation of how the method call works.

Knowing how to use/call a function may be easy but understanding what happens in the background will give you an inside edge.

When you call string method replace ( ). It takes the base string then it creates a copy of it. While creating that new copy the interpreter substitutes the old string with the new string that you have specified during the method call. Once the process of replacing the old string with the new one is done then Python interpreter shows that modified copy of the base string as the output to the user.

In this whole process the original base string remains the same. It is because in Python in-built objects like strings are immutable. Which means once they are created they cannot be changed. In particular, they will remain the same as they were created. Moreover, any attempt to change will result in an error.

That is how and why string method replace ( ) returns a new string as a result.

That’s it for this tutorial. If you have any doubts please feel free to drop me a message on my Facebook. In addition, you can also follow me on my Twitter.

Collection Method: PRIOR & NEXT Functions In Oracle Database