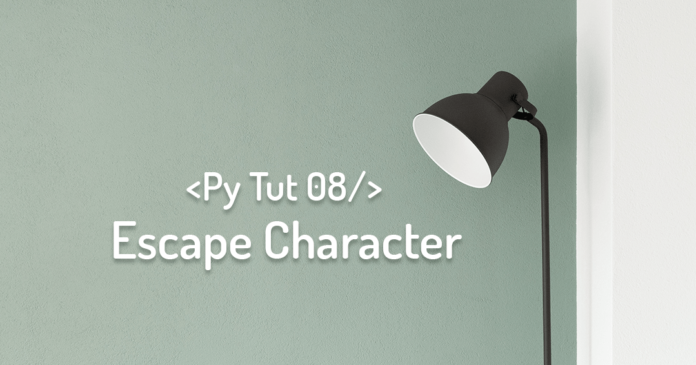 Switching between quotation marks to display a character string is nothing but pain and to deal with it, Python provides us with an option that is “Escape Character”.

What is an Escape Character?

An escape character is a character which invokes an alternative interpretation on subsequent characters in a character sequence.  ~Wikipedia

Python Interpreter uses Backward Slash or Backslash (\) as an escape character. You can use this escape character to deal with special punctuation marks which come in the middle of the string that you want to process.

How to use Escape Character?

Using escape character to handle punctuation marks in python programming is very easy. You simply have to put the backslash before the punctuation mark that you want to keep intact in your string.

To better understand it let’s do some examples. For the demonstration let us use the same strings which we used in the previous tutorial. These were:

String 2. I am going to be a “Python Programmer” very soon.

The string what’s up internet! Contains an apostrophe mark ( ’ ) in the middle thus as per the rule, we must enclose this into a pair of double quotes so that Python Interpreter can process it without raising any errors.

Let’s say you don’t want to do that, you want to use single quotes. But that will conflict with apostrophe mark and raise an error.

In such situations, we can use escape character to solve the above-shown errors, like this.

Example 2: I am going to be a “Python Programmer” very soon.

Unlike previous string this one has multiple punctuation marks which needs to get processed as they are appearing in the actual strings. As the string contains double quotes in the middle thus it needs to be enclosed inside the pair of single quotes in order to get printed correctly like this

But in case, if you don’t want to use single quotes or you have accidently enclosed your string into a pair of double quotes in your project then you take help of the escape character. Like this

You simply have to put the back slash before both the quotation marks in your string and that will solve your error.

Quotation marks for enclosing the string doesn’t matter, as long as you are using the escape character. Click To Tweet

What Is The Eligibility Criteria for Oracle Database Administrator Certification?